I got my MLIS March 2008 and started actively working with Drupal a year after that. (I say “actively”, because in 2006 I did a bit of configuration on a  Drupal 4.7 site, but not for long.) However I never focused my efforts to learn how these two passions of mine, Library science and Drupal, relate to each other. I wanted to, ever since I posted about Drupal’s Biblio module three months ago.
The time is now. The prompt was the end of DrupalCon Denver today, where there was a “Birds of a Feather” session on Drupal in Libraries. LibraryWebHead, an librarian attendee of the event had this to say:

“Working with Drupal has made me more professional in my web work than I had ever been before. It keeps me on the cutting edge. I’m always learning from people building the most amazing sites on the web. [..] this mission – similar to the mission of today’s libraries – is to allow all people to create their best possible lives online. Mozilla, heck, open-source software itself is about empowerment and freedom. These are core tenets that all librarians can embrace.”

Below is a quick summary of resources about Drupal in Libraries, starting with the top four + 1

How to Quickly Build a Web App Using Drupal
We will demonstrate techniques for pulling together a web application using Drupal 7 along with modules and other free components. We will focus on creating a site that provides a good see experience and has a distinctive look without taking a huge effort.

It Takes a Village: Implementing a Homegrown Solution for Streaming Video Resources
Limited to streaming only those videos a vendor hosted, ASU Libraries sought to expand collection options with a trial project for hosting content locally. Kaltura, was selected as the platform, but Kaltura does not work out of the box. This presentation will cover how using Drupal, along with Kaltura, we built a working video hosting solution. The presentation will cover administrative hurdles, stumbling blocks, pitfalls, enhancements, and lessons learned along the way. 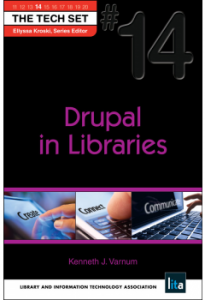 Publications that relate to Drupal in Libraries

What’s missing from this overview is actual examples of libraries using Drupal. I leave that for a later date, as it deserves its own post.